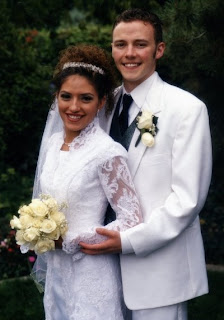 [Written by myself for a college writing course, November 21st, 2006]

The effects of the most important experience in my life are still unfolding. They will continue on, I believe, through eternity. This single moment has brought me untold happiness and growth. It has changed my character, habits, and direction. What I speak of is the precise moment when a young Mexican woman, upon locking her eyes with mine, forgot all she had learned about the English Language. This sole instance caused a young man to search for truth, be joined in matrimony, and give life to a beautiful soul, and many more souls to come.

As she walked toward me to order breakfast, I noticed how cute she was, and soon how poor her verbal skills were. She seemed choked up on what she was trying to say and decided to just point at what she wanted. I confirmed her choice and took her order. As it was being prepared, she shared the reason for why she could not speak, in Spanish, and was now blushing, to my co-worker. After she received her food and left, my friend told me that she said, “When I saw him I could not remember any of my English; I am so embarrassed!” When I heard this, I was immediately flattered and looked out among the tables and stores around the food court to see if I could spot her. I soon learned from my friend that her name was Julieta and that she worked at a little kiosk not too far from us.

The rest of the day I often glanced over at her to see what she was doing. I decided I would go talk to her as soon as we closed. When the time came, I made my way to her and began conversing. She was surprised, but managed to communicate effectively with me. I finally asked her if I could call her at a later time and she agreed by giving me her phone number. One word describes how I felt for the next few days, “twitterpated.”

It seems like ancient history now, but we began dating and I learned that she was a convert to the Mormon Church, of which I was an inactive member. Prior to this, I had fallen away from the faith and went the ways of the world. I had allowed myself to entertain anti-Mormon thoughts. I have never been an antagonistic person, so when she told me this I simply shrugged it off. Eventually her indirect influence and example motivated me to find answers to the questions I had about the Church spawning from the anti-Mormon literature I had read. I was directed towards some good resources of Latter-day Saint apologetics and began to see the flaws and rhetoric in anti-Mormonism. I developed a conviction of the truthfulness of the Book of Mormon which led me to repent of my sins and return to activity in the Church.

I debated with myself whether or not I should serve a mission. I was in love with Julieta, but my new conviction created a desire to serve God in that capacity. Eventually, I came to the conclusion that I would do all I could to serve Him outside of a mission and to marry Julieta. My proposal to her was on our way back from our planned trip to Chicago to see her family. She and I were married in the Jordan River Temple for time and eternity on the 9th of October, 2004. We soon decided to add to our family.

Three months later, we discovered that Julieta was pregnant. The feelings that we shared are beyond elucidation. Nine months of pregnancy brought us close together. On the 27th of October, Julieta was admitted to LDS Hospital to give birth to our first son. He came into this world on the 28th at 5:56 in the morning to a loving mother and father. He weighed seven pounds, ten ounces and spanned 21 inches in length. We gave him the name Skyler Jeffrey Collins, Junior. Over the last year, he has grown big and strong. Julieta and I see each other in everything he does. Our life together revolves around the family we have started. We have a desire to expand our family with as many children as she can produce and I can afford. This family was created and will continue because a young Mexican woman forgot her English.

Sarai said…
That is a great story! I like how you wrote that. My favorite part is Julieta fogetting her english, that is so funny! Que Julieta tan coqueta! LOL
April 27, 2009 at 8:06 AM