Showing posts from 2012
Show all

Nolan Ruined Batman, But He Can Be Saved

By Skyler J. Collins August 04, 2012
I loved the first one, then it went down hill. Nolan's story telling is fractured and choppy. And this latest had a main character who I understood about 5% of what he was saying. It was just plain 'ole bad movie making. I actually feel really bad for this Batman because I like him. I really like this batman, and Christian Bale's portrayal. I loved Batman Begins. The worst part about this latest is that it contains about 5% Batman. I couldn't even tell it was a Batman movie until half-way through. Put plainly, I wasn't entertained. I was bored and frustrated with Bane's voice and the choppy story-telling. It was just a bad movie, worse in these respects than the second. The second had far more Batman, but it still suffered from choppiness. Ugghh Nolan's didn't direct the new Superman coming out, but he did produce it. I hope and pray that it survives the Nolan treatment. "Over-rated" is an understatement when it comes to Christopher Nolan.
6 comments
Read more

By Skyler J. Collins June 12, 2012
Since I started the paleo/primal " diet " 3 months ago , I've lost 25 pounds. I've gone from 215, where I've been the last 4 years, to 190. Now, the purpose of the new diet wasn't weight loss, but I now see how unavoidable that was. I just wanted to eat healthier and more in line with how human beings are supposed to eat. I have less body aches and pains, less illness, and more energy. And I hope to avoid any chronic illnesses, cancers, diabetes, etc. What do I do every day? I eat one piece of fruit in the morning, either an apple or a banana, on the way to work. On the weekends we'll prepare a fruit and greens smoothie in the big blender, for everyone. My lunch is either a grilled chicken salad (yes, with ranch and shredded cheese, not primal), or left-overs from dinner the night before. All our grocery shopping is done at either Whole Foods or Harmon's now. Dinner is usually meat and veggies, and some or the other combination. Once in a while my
Post a Comment
Read more 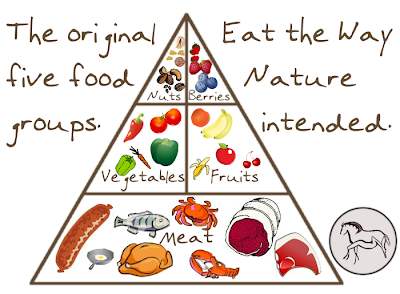 I've been reading up on primal/paleo dieting the last few weeks, ever since Tom Woods, et al, have been promoting it. I've started Mark Sisson's " The Primal Blueprint " and have adjusted my diet accordingly. I'm even going barefoot as much as possible, and that part has felt really good. Anyway, what is the primal/paleo diet? It starts with the premise that our bodies (genus Homo ) evolved over a few million years and asks, what types of foods did these bodies evolve on? Here's the answer in pyramid form: You'll notice a few things missing: Dairy, Grains/Breads, Legumes, and processed sugars. That's correct, no more regular dairy, breads, or soda for me. In addition, I added Fish Oil , Vitamin D , and anasthaxin to my daily regiment of supplements a month ago. I'm super excited about this. My intent is not weight-loss (currently 6 foot, 215 pounds), but feeling good and preparing for middle-old age. I want to have as much control as
2 comments
Read more

By Skyler J. Collins February 27, 2012
I was asked by a good friend of my wife about our unschooling, what my kids do all day, and about grown unschoolers and what they've accomplished. Here is my response: Right now, at 6 and 2, Liani plays with her dolls and toys, and takes turns watching Netflix, usually Barney, with her brother. Skyler watches anything from Bob the Builder to Power Rangers to Jeff Corwin to Mr. Bean to dinosaur documentaries to anything else he discovers. He plays a little ps2, and a little DS. He's beaten the games he has so he's not as into video games at the moment. They do playgroup on Wednesday and Thursday mornings. They do PE on Tuesdays (at the rec. center). Skyler has a game or two a week. Basketball just finished, indoor soccer is next. They see their cousins usually twice a week, and any friends that make it over (such as yourselves). When the weather is warmer, they walk to the library 2-3 times a month, or more, and go to the park often through-out the week. They'll be tak
8 comments
Read more

By Skyler J. Collins January 13, 2012
When kids make mistakes, even a mistake as simple as being annoying around the wrong person, they are either yelled out, cursed, slapped, spanked, or caged (often a mix of several such reactions) by their parents. In other words, they are treated as second-class human beings, undeserving of unconditional love and respect by regular human beings. And yet, through it all, kids come back, again and again, to those that disrespect them like it never happened. They are so quick to forgive and forget. If I was yelled at, cursed, slapped, spanked, or caged for making a mistake toward another adult, I would probably disassociate and have nothing ever to do with that adult for the rest of my life. Adults expect respect from other adults, and when they don't get it, they go their separate ways. But children, it's not 20 minutes before they're wanting to jump and play and giggle with the one who was just violent with them. It's like it never happened. Considering this, it'
Post a Comment
Read more

Unschooled Kids Will Be Different

By Skyler J. Collins January 10, 2012
A concern I've heard regarding unschooled kids is that "they'll be different". What is meant by this is that they won't have the same education, the same experiences, the same memories, the same cultural influences, yadda, yadda, yadda, as their "peers". In my opinion, that's just dandy. Yes, they will be different, but to what end? Will their lives be harder? More stressful? Etc.? I don't believe so one whit. In fact, I believe the inverse is true. There are all sorts of benefits with the unschooling approach to life and learning that compulsory schooling can't match. While I believe the "education" part will actually be better, as their learning is interest-based and interest-based learning is harder to forget than rote memorization, unschooled kids develop initiative and problem solving skills far greater than compulsory-schooled kids. It's self-evident. Kids that are given the freedom to explore their curiosities are pract
3 comments
Read more

The Socialization of Children

By Skyler J. Collins January 02, 2012
From time to time, I tell someone who doesn't already know, usually extended family, that we are keeping our kids home from school. They look puzzled until I use the word "homeschooling". Like clockwork, sooner or later, they mention the social aspect of schooling and why it's important that kids play with other kids. I respond, not wanting to get into anything, that we have play groups during the week. Now, that's true, the play groups, but that's not a proper response to one's concern about socialization. Actually, I strongly believe, through logic and experience, that what kids learn in school is anti-socialization. But that's another post. What I wanted to briefly talk about here is proper socialization. From the time they're born until they're about 18, children are preparing for the rest of their lives; in other words, they are preparing for adulthood. Part of that preparation is learning to communicate with other human beings. That&#
Post a Comment
Read more
More posts