By Skyler J. Collins July 21, 2008
If you haven't already, go see this movie. My wife and I and our friends Aaron and Sarai really enjoyed it. I have to admit, however, that I enjoyed it more after I've had a couple days to think about it. This new Batman isn't like any other. He doesn't have an elaborate Batcave with elaborate Batmobiles and Batgadgets. He's actually quite un-fantastic. He brings a great closeness to being a human being than previous versions have. And even Gotham could be an actual city. Actually, I see it as a city without real gun-rights and a high rate of crime, like Chicago, New York, San Fransisco, and Washington DC.

Although Batman has gadgets, they aren't branded like his gadgets usually are. I especially like his car, the Tumbler, and how it's a model of function over form. His suit is this way as well. It's not that he has a costume for the sake of wearing a costume. Every part of his suit has a function, and an important one, his cape probably being the most important as he's able to glide with it from extremely high places. We even see how he's forced to ask the advice from others when he's planning something, because he doesn't know everything himself.

But enough of Batman. There are three villains in this movie. Scarface, The Joker, and Harvey "Two-face" Dent. Scarface gets worked in the beginning and that's the end of him. The Joker than makes his debut and Two-face isn't created until the last 45-minutes. As for The Joker's performance, I will say that it is memorable and probably the best played villain, but I don't think it's award worthy. They also take the Two-face character in a completely different direction than previous versions. Those versions have him playing Mob-boss, etc. That's not the case here.

Everything considered, it's definitely worth seeing and seeing on the big screen. And I just found out it beat Spiderman 3's opening weekend record ($151M) with $155M in sales. 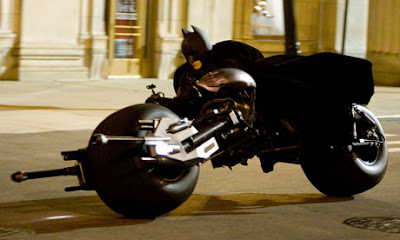